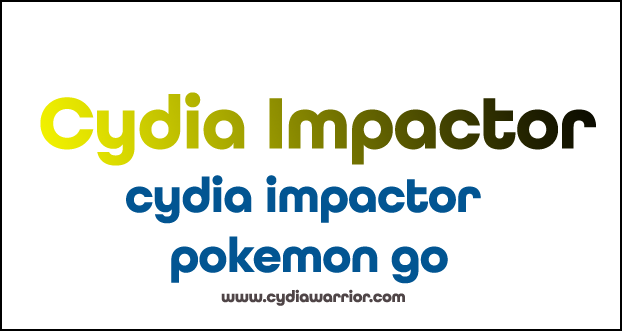 Pokemon Go is an Augmented reality (AR) mobile game introduced in 2016 by Niantic collaboration with Nintendo and the Pokemon company for iOS and Android devices.

The users who are using the latest version of Pokemon Go have noticed different changes in the application as Niantic has removed the restrictions for jailbroken users and now they can start playing the game without any tweaks such as master ball.

It is not necessary to have Cydia tweaks which mean jailbreaking is not needed. With the use of Cydia impactor you can have Pokemon Go++ to your iPhone, iPad or any other iDevice.

Using Cydia impactor to install poke go++ 2.0 to your device

Step 1: Download the hacked R86 .IPA. It is now compatible with v1.81.3. Thanks to Pokemon Go++ team this one work without the ipa.cpp:101 error or crashing issues when you open the game.

Step 2: Grab the latest version of Cydia Impactor to your device. It works on both Windows and Mac operating systems.

Step 3: After that connect your iOS device to the computer and launch Cydia Impactor.

Step 4: Next drag and drop the .ipa file into the tool and you must sign in using your Apple ID.

Step 5: When the certain message prompted select Allow, and it will start signing in process.

This process is same as installing signed iOS apps using FunBox. The only difference is by using this you do not need to jailbreak your device to install it. After you install the Pokemon Go++ app you can use it right away, this mod has built in the official Pokemon Go game. You must remember to Trust the application through your profile settings, moreover you must repeat the same process every week because unfortunately the free developers account only allows you to use it just seven days after you install it.

Can you get banned for using the joystick in Pokemon Go?

Joystick is one of the famous hacks for  Pokemon Go. It uses a fake GPS app. Yes you can get banned by using a joystick in Pokemon Go but you have the chance to decide whether it is worth getting banned after collecting all the Pokemon.

What can you do if the joystick is missing?

Your joystick can not be gone missing in Pokemon Go. There is an easy way to fix this issue. All you have to do is to go to settings and enable a fake location after that turn on the joystick. It will definitely work.

What is Pokemon Go spoofing in an iOS account?

Pokemon Go is kind of an app that is entirely based on your location. So if you get stuck in a specific area it will affect the number of Pokemon you catch. This is why people use a Pokemon Go spoofing app to play Pokemon Go because it is an app to fake your location. But the thing is before using you must know whether you are safe and reliable otherwise you will get banned.

So these are the basic things you must know about Cydia Impactor pokemon go.