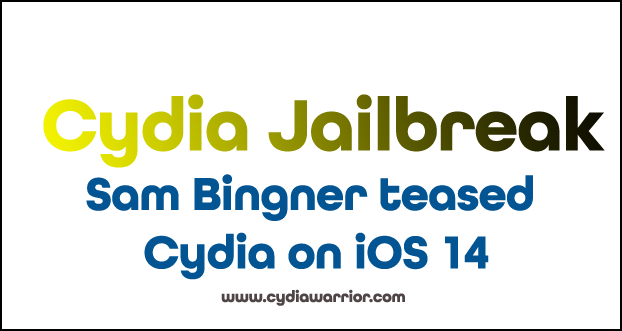 Apple officially revealed iOS 14 and iPadOS 14 for the first time in WWDC 2020. And just in the same morning, Dany Lisiansky, who is a co-developer of the Checkra1n team revealed a screenshot of their Checkra1n jailbreak app working on an iOS 14 running iPhone. If you felt like that was really fast, you are not the only one who felt like that.

Dany Lisiansky discovered that he had a lot more work to do to complete the Checkra1n Cydia Jailbreak for iOS 14 and iPadOS 14 devices. Things went really well, progressing rather quickly with the help of the unique talent encircled with the Checkra1n developer team. Just sometime later, Checkra1n co-developer Sam Bingner revealed a screenshot of the Cydia package manager working on an iOS 14 running iPhone X.

The hacker noted a Tweet as “A little more progress”. Everyone was delighted to hear the good news. Later on, Cydia package manager was updated to version 1.1.36 with the opening iOS 14 beta compatibility.

Cydia is the best third-party app store that many jailbreak users rely on installing their favorite apps and tweaks on iDevices. It is known as the default third-party app store for jailbroken devices. Therefore, almost all jailbreak apps, including Checkra1n, bring the Cydia Installer attached to them. At the moment, Cydia is the only package manager that has been demonstrated for iOS/ iPadOS 14 devices. However, Cydia alternatives such as Sileo and other package managers would be available for iOS 14 devices soon.

Checkra1n jailbreak app updated for many further updates after its release of iOS 14. The latest Checkra1n update by now is 0.12.2. It supports all iOS/ iPadOS 14 related versions except the iOS 14.2.1. You can even jailbreak and install Cydia on the latest released iOS 14.4 and iPadOS 14.4 devices by using the Checkra1n app. However, it only supports a few A5-A11 chipset based iPhones, iPads, and iPod touch devices.

Read more related articles from below!

Indeed, Checkra1n supported all A5-A11 chipset based iOS 12/+ devices. But with its latest update for iOS 14, you can only use Checkra1n jailbreak on the following devices.