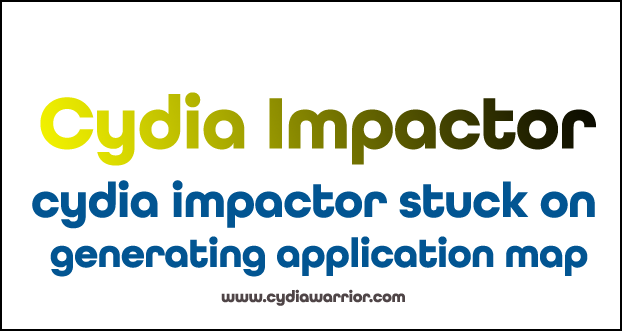 Cydia Impactor is the best app that can be recommended to install third party applications to iOS devices. The functionality of this app is to install APK files to Android devices and IPA files for iOS devices. Jay Saurik Freeman introduced this app in 2013 and later on it has been undergone with different versions and updates. Cydia impactor comprises a number of unique features such as inbuilt drivers, package installation, bridging connection, USB driver installation, rooting of android devices, fastboot and bootloader unlocking etc.

It is obvious to have errors in any application. Cydia impactor also has different errors and its stuck on generating application maps on the computer is one of them.  It prevents the app from performing its certain tasks, so it is supposed that this is due to an error with the app or IPA file. Most of the users have faced this issue and they have no idea about how to fix this because the reason can vary. So here is a guide about Cydia Impactor and how to fix it.

Why is the Cydia Impactor stuck on the Generating Application Map?

How to fix Cydia Impactor stuck on generating application maps?

It is not enough just to find the reasons for an error. It is also important to figure out how to fix the issues. The most important thing is to get the latest version of Cydia Impactor for your operating system from the official website as it is important to be updated. The next thing you must do is to check whether the IPA file you are trying to download is corrupted. As the corrupted files may troubleshoot with sideloading the app it is important to check it. Yet the files are not corrupted and still it is not working try again after redownloading the IPA file. Apps have its certain minimum requirements and it is mentioned in the app store, play store or definitely in its official website. The iOS version of the app must be compatible with the iOS version of your device otherwise it will be stuck on generating application maps. Furthermore as mentioned above the maximum number of apps allowed to sideload is three. If you are trying to sideload more than three apps it is better to delete those apps and it will fix the error for you. If any of these solutions did not work all you have to do is to hard reset the iOS device and try sideloading the IPA app. You can try rebooting the device and see that it solves the issue. Inorder to hard reset an iPhone 8 later versions you must press the volume up key and release it. Then press and hold the side key ad release it. After that let go of the side key when the Apple logo appears. To hard reset iPhone 7/7 press the volume down and the sleep key simultaneously. Then let go of both keys when the Apple logo appears. To hard reset iPhone 6s or 6s plus press and hold the Home and wake keys simultaneously. And release the key when the Apple logo appears.

So these are the main things you should know about Cydia impctor stuck on generating application map.